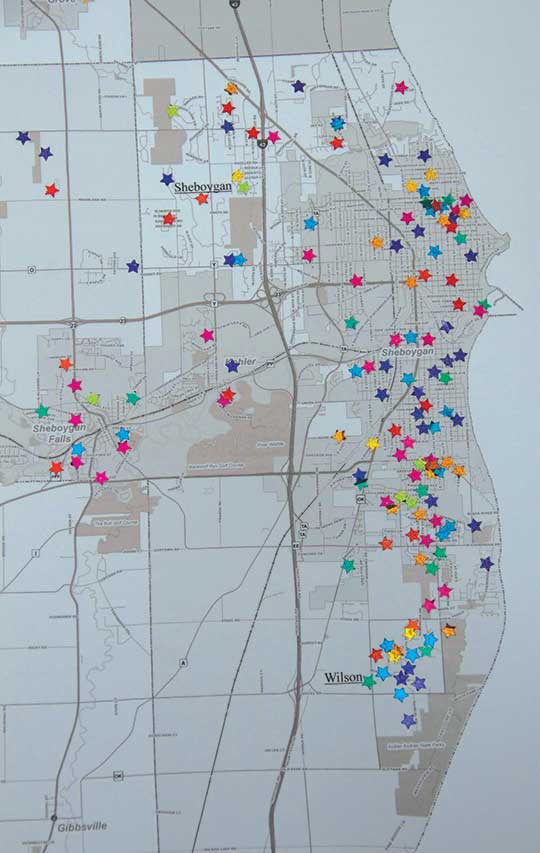 Church commits to 10,000 points of impact

Bethany Reformed Church is encouraging its 400 members to have impact for Christ in the places where they already spend time: work, school, their neighborhoods.

Members of Bethany Reformed placed stars on a map to pinpoint where they already spend time and committed to having an impact for Christ in those places.

In December, instead of waiting at the bus stop, six-year-old Grant was shoveling the sidewalk of a neighbor who was out snow-blowing. When Grant’s mom called him to get on the bus, he tugged on the neighbor’s arm and said, “Jesus loves you, and that’s why I’m shoveling your sidewalk.”

It was the perfect introduction for Grant’s church, Bethany Reformed in Sheboygan, Wisconsin, when it kicked off a major goal on January 1: 10,000 points of community impact in 2015. “We want it to be everybody, from the youngest to the oldest, thinking of ways they can be blessing somebody in the name of Jesus,” says lead pastor Philip Rose. “Empowered by the Holy Spirit, ordinary people become the body of Christ in the world.”

The church is encouraging its 400 members to have impact for Christ in the places where they already spend time: work, school, their neighborhoods. Stories of engagement are starting to pour in.

The idea arose out of Bethany Reformed’s participation in a local missional engagement leadership network. Seven RCA churches are participating in the network, which is one of many pilot groups related to Transformed & Transforming, the RCA’s 15-year strategic goal.