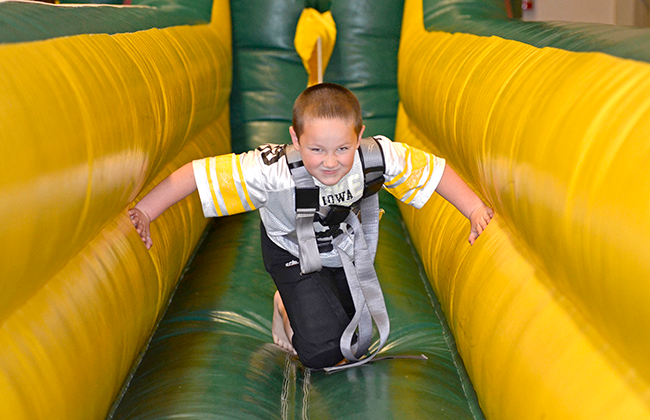 Halloween in Lemont, Illinois, isn’t just about trick or treating. It’s also about bounce houses. Fun with friends. And wearing your costume unencumbered by a winter coat.

Halloween in Lemont, Illinois, isn’t just about trick or treating.

It’s also about bounce houses. Fun with friends. And wearing your costume unencumbered by a winter coat.

The second annual fall festival at Christ Community Church (RCA) in Lemont had all those things—and a good number of adults in goofy costumes, to boot.

The fall fest takes place inside the church. That means weather’s not an issue, kids can show off their costumes, and it gets people in the door. And it’s all free.

“This is a way for them to step into the church unthreatened, and they can enjoy the atmosphere and the other activities,” says Lisa Applegate, children’s ministry director at Christ Community Church.

“Walking into the gymnasium, it’s full of people, and you smell the popcorn popping. You hear the kids running and screaming as they’re jumping on the jumpees, having a great time. As you look over, you see the tables with all these parents sitting at them, talking to other parents. It’s just a fun atmosphere, smiles on faces.”

The event, which is primarily an outreach, drew 70 percent of attendees from outside the congregation. Applegate says there were a lot of children ages fifth grade and younger who came with parents or grandparents. There were quite a few middle schoolers from the congregation, too; they volunteered their help for an hour, then played for an hour.

For Applegate, the event is about relationships. Tables are set up so parents can talk while still keeping an eye on their kids. Greeters from the congregation circulate, welcoming people and learning their stories. Trick or treating is set up down a hallway, with church members claiming each door, decorating it and handing out candy there.

“They decorate the outside of the door with any kind of scene they want. They dress in character and everything,” Applegate says. “They really get into it! We had a weird science theme, we had camping, we had Charlie’s pumpkin patch, we had Candyland.”

The gym and church entry are filled with bounce houses and carnival games. “It lets the kids get out their energy,” she says. “We have popcorn and snacks for everybody to have and a bunch of carnival games they can play.

“Adults feel like they were able to see other adults and have a normal conversation. The kids are all playing together and establishing those relationships. They’re able to run around with their friends. It’s an easy way for church kids to be able to invite their friends to church.”

Several hundred people attended the most recent fall fest, and 4,000 pieces of candy were handed out. A few guests filled out contact cards, and Applegate connected with them the following week, extending an invitation to worship.

Applegate says the event was a little easier this year because of a new block party trailer from the Chicago Kingdom Enterprise Zone, or KEZ. KEZs are regional areas where the RCA and the Christian Reformed Church in North America have partnered together to work on church planting and other collaborative ministry. Block party trailers come equipped with a bounce house, a ball pit, bean bags, and carnival games, along with a grill and other tools. Normally, these parties take place outside—but Applegate says the inside location is key to the success of their fall fest.