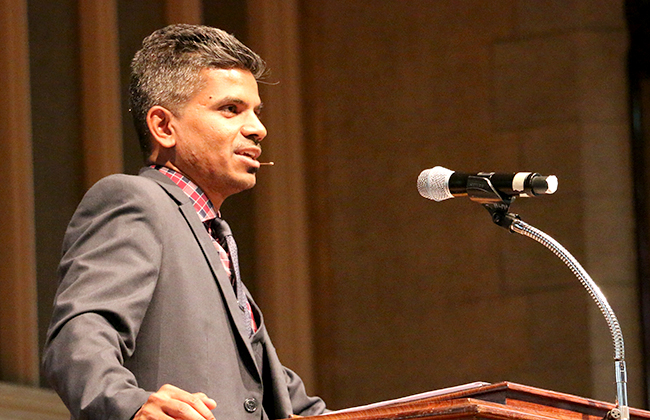 “We are ordinary people called to do extraordinary things,” says JP Sundararajan.

“We are ordinary people called to do extraordinary things,” says JP Sundararajan. His latest extraordinary calling? Serving as the new director of RCA Global Mission. He will begin his role on October 1.

Sundararajan grew up in Bangalore, India, a city of 12 million people, and after graduating high school, attended Northwestern College in Orange City, Iowa, a city of about 6,000. It was there that he first learned about the Reformed Church in America. (Northwestern College is one of the three colleges affiliated with the RCA.) After starting as a biology major with the hopes of returning to India as a medical missionary, he felt his calling change. He graduated with a degree in psychology in 2000, then moved to Holland, Michigan, where he received his M.Div. from Western Theological Seminary (2003) and met his wife, Katy.

For the past 12 years, Sundararajan has served as an RCA missionary with Audio Scripture Ministries and recorded the Bible in almost 100 languages. He has also partnered with World Cassette Outreach of India to work in more than 13,000 villages in India and recently finished a project that provided audio Bibles to more than 30,000 families. Current projects involve working with people on the margins: people stigmatized by leprosy or visual impairments, people who are non-literate, and people who are victims of exploitation and trafficking.

“My true joy has always been in telling the story of God’s work in India … because in telling these stories, the greater body of Christ is edified,” Sundararajan says. That’s why he is so humbled about his new role as director of Global Mission: the opportunity to share the stories of RCA missionaries with the wider church.

“JP is a great visionary leader who brings a wealth of experience in the area of missions to this position and is a great addition to the team,” says Eddy Alemán, RCA general secretary.

Through missionaries and mission partners, RCA Global Mission shares God’s love around the world. It strengthens and grows the global church by supporting ministries of compassion, by developing leaders, and by sharing the good news.

“I look forward to finding new opportunities with congregations to engage global missions and use the resources we have to bless both the congregations and communities,” Sundararajan says. “Even as the world makes its presence felt in our neighborhoods, what a beautiful opportunity for us to lean into our history, our resources, and our missionaries to work together in bringing the light of Jesus into this world!”

Sundararajan lives in Holland, Michigan, with his wife, Katy, and their two children.