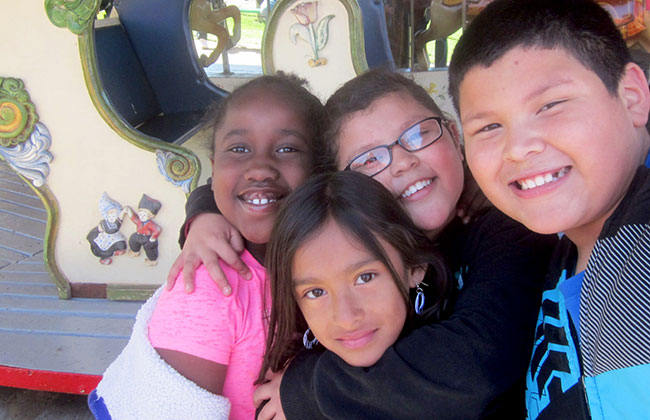 Maplewood Reformed Church beefs up its mentoring program for neighborhood kids—in part because of the transformation the congregation experienced through the Ridder: Churches Learning Change process.

It’s like asking whether the chicken or the egg came first, says pastor Aaron VanDerVeen, when asked about the impact of Ridder: Churches Learning Change (formerly Ridder Church Renewal) on Maplewood Reformed Church’s involvement with Kids Hope USA. There is not a clear before and after; rather, the two programs are intertwined branches with the same roots.

Those roots are mission and discipleship, and they run deep at Maplewood Reformed.

“Maplewood has always had mission in its DNA,” VanDerVeen says. “Joining God in his mission in this world—we’re a family, so it all goes to serve in the mission of loving God and neighbors.”

In 1995, the Maplewood congregation, located in Holland, Michigan, embarked on a new journey of discipleship, as it became one of the first churches to establish Kids Hope. The program partners churches and schools, pairing an at-risk elementary student with an adult mentor who spends one hour per week with them, providing academic support and building a relationship.

“What’s important is you being there [for the student],” says VanDerVeen. “It’s the ministry of being consistent and showing up regularly. That’s something they might not have, so you start showing that someone cares.”

Members of the church have been faithful to their students for the past 23 years, changing the lives of nearly 300 students. Julie Hedges, Maplewood’s Kids Hope director, reports that more than half of the congregation is actively involved in Kids Hope, with approximately 20 mentors each year, three prayer partners for every mentor, and additional participants who help with parties and special events.

While participation is not a problem, the program does have its challenges. Every year, there is a high rate of turnover. As many as four in twenty mentored students move out of the school district during the academic year because of changes in their parents’ employment. This ebb and flow makes it hard to build relationships with the Kids Hope families.

“We are trying to develop rapport with the families,” says VanDerVeen, “but there are some major hurdles there. The challenge is always about how we go further.”

“A lot of the families are very private, so it’s hard to get them to come to a church,” adds Hedges. “I work hard to establish trust with the families, but there’s a lot of fear out there, especially right now.”

In this effort to reach deeper, the Ridder: Churches Learning Change process played a significant role. An intensive five-year process, Ridder helps congregations make deep change to work toward God’s unfolding future. A team of pastors and lay leaders guides each other and the congregation in greater pursuit of God’s mission, equipping and transforming everyone as disciples and leaders.

“Ridder gives permission to keep doing what you’re doing,” VanDerVeen says. “It’s helped [us] say, ‘Wow! Maplewood does [Kids Hope] really well.’ We are aware of living out God’s mission through a program. Is it bringing all sorts of members to our church? No, but we are faithfully taking part in the kingdom of God, ministering to families and kids.”

However, Ridder is about more than encouraging churches to be faithful in their ministries. VanDerVeen says it also gives permission to try new things and to step out into the unknown.

For Maplewood, that step into the unknown began with the question of how to make Kids Hope more than just a one-hour mentoring session each week. Partnering with the school social worker, the church formed a plan to help Kids Hope families who fall below the poverty line yet are not getting any assistance from the government.

The vision, named Kids Help, was to provide a holiday meal for these families. The generosity of the Maplewood congregation grew the project into much more, with each family receiving a delivery of multiple boxes full of food this past holiday season.

Maplewood’s next step into the unknown involves furthering Kids Help, as they hope to “adopt” families and help them throughout the year, whether the need is groceries, home repair, or simply being a resource.

Now in the wake of the Ridder process, Maplewood is left to consider how the work will continue. If the intersection of Kids Hope and Ridder has been any indication, it all comes back to those roots of mission and discipleship.

“Kids Hope is not a program; it’s kingdom work,” says VanDerVeen. “Ridder is all about that, asking, ‘How do I live in this kingdom of God? How do I show forth the kingdom to the greatest of these and the least of these?’ It’s about going into uncharted territory. It’s saying amen to doing work for the least of these and doing what God has called us to do—to do justice, love mercy, and walk humbly with him.”