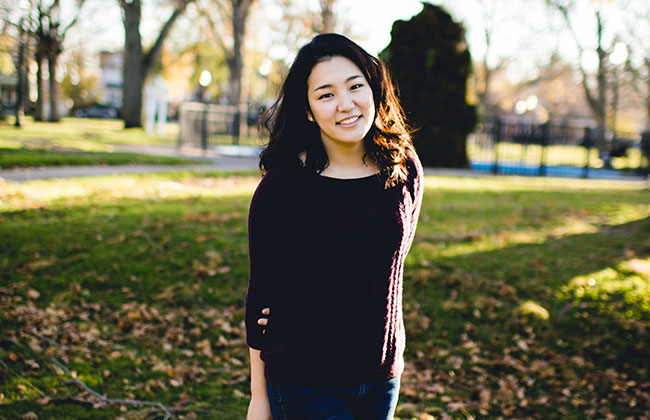 When Kanoko came to United States for college, she thought there was no way she would become a Christian.

“Whatever you do, do not become a Christian!” This is what my mother told me before I came to the States from Japan to attend Hope College. I knew that there were many people at Hope who were serious about their faith, but I did not think I had to be a Christian. So I replied, “There is no way I will become a Christian!”

I am now a senior at Hope and I just became a Christian through the RCA Japanese ministry.

In Japan, I believed that I would be a good person as long as I led a moralistic lifestyle as the teachings of Buddha taught me. My mother’s family members were strong Buddhists. So it was unthinkable to be converted to Christianity unless a huge miracle occurred! I just wanted to learn about Christianity as an important part of American culture.

I started my life at Hope College in January of 2013 and slowly got involved in the Japanese community. I felt distant because I was not a Christian. But I did not want to be a Christian just to be accepted into the community.

During my second semester at Hope, I was invited to a gathering. I did not know why, but tears streaked down my face while the students were praising God. From that point on, I started coming to Japanese services and FIGs [Friends in God] Bible Study, led by Andy Nakajima from the RCA, regularly. However, there was a part of me that could not completely accept God because I was constantly comparing Christianity with Buddhism.

It was about that time that I found friends who accepted me and didn’t make me feel like a foreigner. I began to wonder where such kindness was coming from. In conversations with my friends and in the FIGs, I heard a lot about “love.”

Then it hit me. In my upbringing, there was no mention of love, so when Christians talked about love, something changed inside me. I was expecting a miracle to believe in God, but his love fills the small things in our daily lives. The love I was receiving from people was actually coming from God! I began to notice the love of Jesus through friends and my community. I felt so much joy, and I accepted Jesus as my Lord and Savior.

Let us expect God will do even greater work this coming year!

Kanoko Yamazaki is from Tokyo, Japan, and is a senior at Hope College. “My Voice” shares the views and experiences of RCA women and men between the ages of 18 and 29.