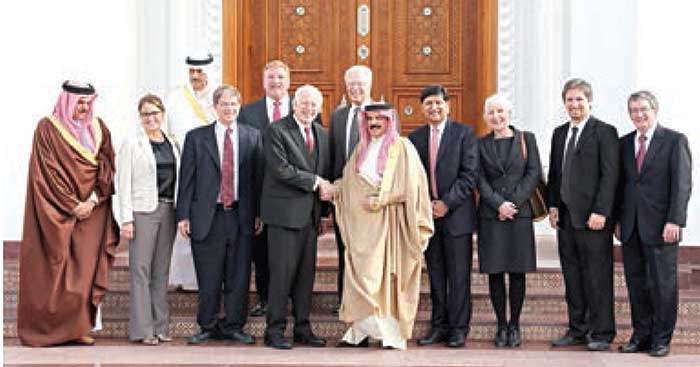 A hospital founded by RCA missionaries more than 100 years ago has received a special honor: A meeting between its board members and the king of Bahrain.

A hospital founded by RCA missionaries more than 100 years ago has received a special honor: A meeting between its board members and the king of Bahrain.

The new board of directors of American Mission Hospital in Manama, Bahrain, visited King Hamad at Safriya Palace on Tuesday. According to the Gulf Daily News, the king received a briefing on future development and healthcare plans from the hospital board members. He also praised the hospital for “providing excellent health services to the citizens and residents,” the Gulf Daily News reported.

“[King Hamad] was amazingly supportive of the American Mission Hospital in Bahrain,” said Laura De Vries, AMH board member and a member of the RCA. “His office even called this morning to reiterate how impressed he was that the RCA is engaging at such a high level.”

The RCA has maintained a strong relationship with AMH since its founding, and that partnership continues today. Several AMH board members from the RCA were present for the meeting with the king, including De Vries; Duncan Hanson, supervisor of RCA mission in Europe, the Middle East, and India; Brad Lewis; Josh Perkins, principal of Al Raja School in Bahrain; and John Stapert.

Also present for the meeting were George Cheriyan, chief medical officer for AMH; and Julia Tovey, chief operations officer for AMH. Tony Campbell, AMH board member and RCA director of missional engagement and global mission, was unable to attend.

“We are proud of it [AMH] and we have always been keen to support it as it reflects strong historic relations between Bahrain and the U.S.,” King Hamad told the Gulf Daily News.