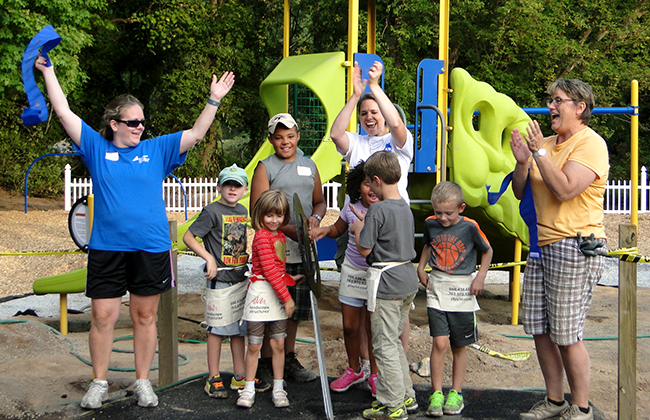 A New Playground for Schoharie

Home › A New Playground for Schoharie

After Hurricane Irene decimated the area’s only playground, Schoharie Reformed built a new one.

“This is a dream come true.” Those were the words of Sherri Meyer-Veen, copastor of Schoharie Reformed Church, at the September ribbon-cutting ceremony for a new playground on the church grounds.

Later that month, Hurricane Irene struck and put those dreams on hold. After the hurricane, all that was left of the playground was a swing set.

In the aftermath of flooding, the church became a volunteer hub for the area, and many volunteer groups inquired about the playground. Some groups even offered to help rebuild it. But none of the groups were able to follow through with their offers, leaving Schoharie Reformed to wait for the right time. In the meantime, the village of Schoharie continued work on its revitalization plan, emphasizing the creation of more play spaces in the village.

When a new church committee formed to try to regain momentum and apply for some grants, they surveyed the community to gauge interest. More than 100 families responded to the survey. It was clear that this was a dream not only of the church but of the entire community.

In 2016, Schoharie Reformed was awarded a $15,000 partial matching grant from KaBOOM! and Dr Pepper Snapple Group. Thanks to the grant, volunteer support from Faith Lutheran Church of Rochester, and a decision to step out in faith by Schoharie Reformed’s consistory, the church was able to fulfill the dream and rebuild the playground.

On a sunny Saturday in September, Schoharie Reformed held a community build day that lasted into the evening. Volunteers came to assemble everything from slides to monkey bars to new swings. They managed to erect all of the new equipment by the end of the day. Additional work days in October and November completed the surfacing and fence.

The playground is now used on a daily basis. Because the survey results showed a wide variety of interests, the new play area reflects that diversity. It features adult fitness equipment, a toddler section, more swings, ADA accessibility, and a section for older children. All of these elements have been incorporated into the original playground footprint, with the help of a small expansion. Portions of the parking lot were painted, with plans to paint more in the spring to provide space for basketball, four square, and hop scotch.

“This is exactly what we needed as we continue to rebuild and revitalize this community!” Schoharie’s mayor, John Borst, said at the ribbon cutting.

Colleen Henry, codirector of the playground building project says, “I remember when my boys were little, bringing them to a park with play equipment as well as basketball courts. Those were wonderful times and I am so pleased local families now have this newly designed space.”

The playground is a part of Schoharie Reformed’s larger rebuilding project and capital campaign. Funding is still being gathered for the playground and the full restoration of the church building. The church welcomes additional support, which can be mailed to Schoharie Reformed Church, PO Box 635, Schoharie, NY 12157 or donated online, either on the church website, www.schohariereformedchurch.org, or at www.gofundme.com/rebuildsrc.

Annie Reilly is communication coordinator for the Regional Synod of Albany.