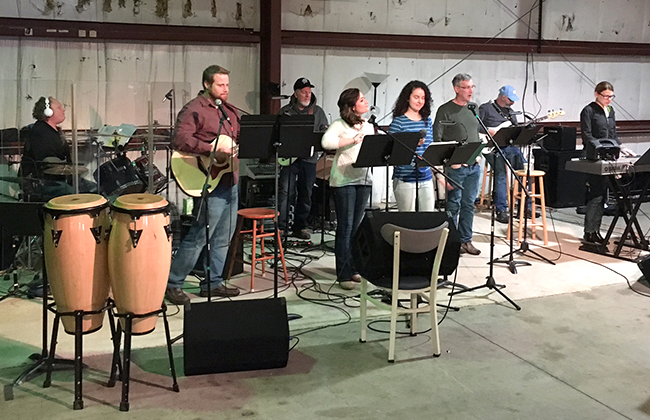 When its first pastor left, River Rock Community Church had to figure a few things out—like whether they’d be able to stay open.

River Rock Community Church has always been different. Officially planted at the start of 2009, the RCA church in Sheboygan, Wisconsin, has met in homes, in a Girl Scouts building, in the garage of a gas station, and in the warehouse where it meets today.

River Rock was the first new church organized by the Wisconsin Classis in 50 years. Demographically, it’s a young and relatively diverse church. The vision for its ministry began percolating in 2007 when a group of RCA leaders in Sheboygan County decided they wanted to work together to reach new people. Three churches in the area—First Reformed in Oostburg, First Reformed in Sheboygan Falls, and Bethany Reformed in Sheboygan—sent a few members to be part of the plant.

“From the first meeting, the major theme was that we wanted to be a ‘different’ ministry than the traditional churches we had left,” says Matt Rauwerdink, a member of River Rock’s founding team. “We didn’t want to take members from existing ministries in Sheboygan County, but instead tap into the large population of hurting people in Sheboygan County that do not know Jesus Christ.”

Jon Nienhuis pastored the burgeoning River Rock from the beginning. He helped get the church off the ground and piloted some of the early outreach efforts that have become hallmarks of the church, like Saturday night bonfires, a softball team, and an annual concert called “Rock the Block.”

The church became a place of freedom. A place to share.

“The willingness of people to share intimate details of their struggles in their lives is something that I have experienced at River Rock and nowhere else,” says Rauwerdink.

But the church itself experienced a struggle in the spring of 2015. Nienhuis, the founding pastor, took a call to chaplaincy in a Florida prison ministry.

“When this happened, many people didn’t know what would happen to River Rock,” says Rauwerdink of Nienhuis’s departure. “We were not organized and were a relatively small group of people, so it was not known whether we would close or try to continue our ministry.”

The church felt closure was not an option.

Over the next year, with the support of Lyle Zumdahl, classis leader for Wisconsin Classis, River Rock not only survived, but it brought new people into the family. Zumdahl preached several Sundays each month and took on some pastoral duties. A few other local pastors also preached occasionally.

“The classis wanted [River Rock] to succeed,” says Zumdahl, “but wanted to put a sense of urgency about moving forward.”

Rauwerdink calls keeping the group together—and bringing in new folks—an “impossible” task, but one the Lord empowered the church to achieve.

In July 2016, River Rock called Jim Hildebrandt to lead the church. He says he started at River Rock with a lot of delight.

“River Rock is a haven for people who are hurting and longing to be healed by Jesus,” he says. “There is much open, honest seeking after truth and unashamed transparency among the community.”

Hildebrandt thinks of River Rock not only as a church, but also as a laboratory. “It is an environment where things are tested, observed, scrapped, and tried anew in an effort to rediscover and also keep in step with the movement of God as we make disciples and work toward engaging the community.”

For all the seasons River Rock has seen so far, it hasn’t stopped being different. It still meets in a renovated warehouse, which the church sees as a metaphor for itself.

“Our space says it all,” River Rock’s website reads. “It is open, industrial, raw, and unfinished … just like us. We don’t pretend to be something we’re not. Just real people on a journey to wholeness in Jesus.”