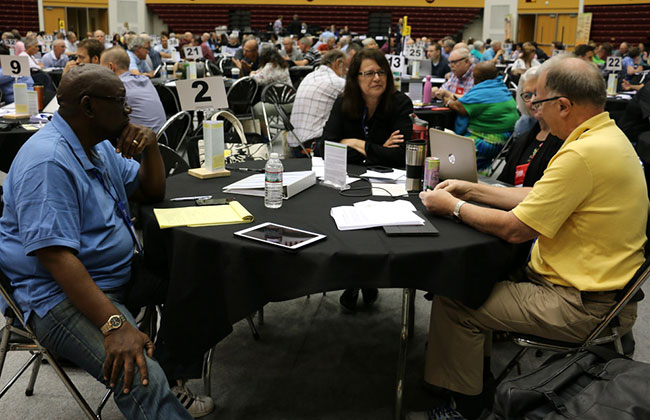 General Synod delegates passed a recommendation to form a 2020 Vision Group proposed Friday morning by Don Poest, interim general secretary. The vision group will research and identify strategies and consequences for three possible scenarios for the future of the RCA: staying together, radical reconstituting and reorganization, and graceful separation. Per the recommendation, one specific option the group will consider is for the RCA to be a single denomination with three or more affinity assemblies within it.

Poest brought the recommendation in response to deep division he has seen in the denomination.  The Advisory Committee on Overtures and New Business brought the proposal to the synod floor after making a few changes to better address other business on the synod agenda, as well.

The recommendation calls for the group to be appointed by the new general secretary and interim general secretary in consultation with the General Synod Council (GSC). Care will be taken that, as much as possible, its membership represents the full diversity of the RCA. There will be between ten and twelve people in the group.

Discussion on the recommendation included four amendments, none of which passed, and five calls to cease debate. But in the end, delegates voted overwhelmingly in favor of passing the original recommendation.

The group’s work will be guided by:

The recommendation calls for the vision process to “be bathed in denomination-wide, hope-filled prayer that God will show a way.”

Here’s the full text of the recommendation:

To appoint a 2020 Vision Group to work, in consultation with whatever staff, commissions, councils, agencies, and/or outside consultants the vision group deems necessary, to identify possible scenarios, strategies, and consequences for these future options for the Reformed Church in America:

This should include, but not be limited to, consideration of one denomination with three or more affinity assemblies within it. Care should be given to the administrative, legal, financial, real estate, and emotional burdens of each option. Any potential new bodies should be identified by what they are “for” rather than what they are “against” and should be consistent with Reformed theology. This should be done in ways that affirm all parties. This must be bathed in denomination-wide, hope-filled prayer that God will show a way.

As the vision group engages these options, its work should include, but not be limited to: