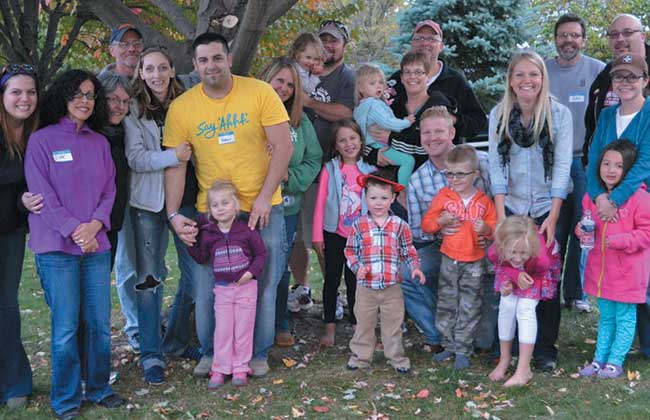 “The best way for a church to renew is to participate in the planting of a new church,” says Doug McClintic. And that’s just what five RCA and CRC churches are doing: planting a church together.

RCA, CRC churches in Kalamazoo plant a church together

Luminex, an initiative of the Great Lakes Region, is enjoying common ground between the Reformed Church in America (RCA) and the Christian Reformed Church in North America (CRC). Together, three RCA and two CRC congregations are starting a collaborative church plant in Kalamazoo, Michigan, aptly named Common Ground Church. Luminex supports clusters of congregations as they collaboratively plant churches.

“The real story for me,” says planting pastor Chet Carlson, “is how nine times out of ten, a door will open to share my testimony because people want to hear about this unity between churches.”

The real story for Doug McClintic, who leads the Luminex initiative and is the RCA church multiplication consultant for the region, is the interesting mix of church multiplication and church revitalization. “Planting disrupts the life of an existing church so that it has to undergo some renewal,” he says, “and that dynamic is already at work in the Kalamazoo churches that are part of Luminex.”

Although slow, he admits, the process is designed to make planting accessible—in fact, normative—for every church. “Statistics are clear that the best way for a church to renew is to participate in the planting of a new church,” he says. “These churches are healthier, grow faster, and have higher renewal dynamics than churches that do not participate in planting.”

In Kalamazoo, the governing board of the new church is composed of one pastor plus one member from five area churches: First Reformed of Portage, The Bridge (RCA), Voyage (RCA), Westwood CRC, and Southern Heights CRC. For three years, they will gather with Carlson and McClintic as the new church launches.

Nationally, only about 60 percent of church plants succeed, says McClintic, but the process Luminex uses has improved that statistic by about 20 percent. It uses the work of Dr. Charles Ridley, developer of the Church Planter Profile, which identified 44 characteristics of successful plants. The Kalamazoo Luminex hired Carlson in August 2014 after a year of preparation and using this extensive process to determine his readiness.

“I’m here because my life story led me here,” says Carlson. “My story is filled with brokenness that God has put back together, and the gifts of that brokenness have been humility, a personal witness to God’s power to heal, and a non-judgmental attitude important to building relationships with unchurched people.”

“I really only know faith in terms of diversity,” he continues, calling his life a “spiritually nomadic journey” that includes Lutheran and Wesleyan family ties; an Assemblies of God preacher father who did pulpit supply in many denominations; degrees from both Christian and Missionary Alliance and Baptist denominational schools; and now his work in the RCA for nine years, first as a youth pastor and then as ordained minister since 2012.

Common Ground is in the second phase of planting, offering a preview service every month at the Fetzer Center on the campus of Western Michigan University. The final phase, launch, is scheduled for mid-September.

“The practical aspects of this collaboration are what drives me as I’m waiting for results among unchurched people,” he says. “It’s continually bearing fruit in many ways by promoting unity within the church.”

Carlson cites growing friendships and collegiality among church board members as evidence of this unity. “It’s more complicated with five churches,” he says, “but it’s also more fruitful and has led to some of the most meaningful prayer gatherings I’ve ever been part of.”

One such gathering drew 70 people who had committed to pray for members of the Luminex initiative. “There was such a profound unity,” he said, “and from the feedback I heard, we all felt it. This is an historic venture, and I’m so excited to be a part of it.”