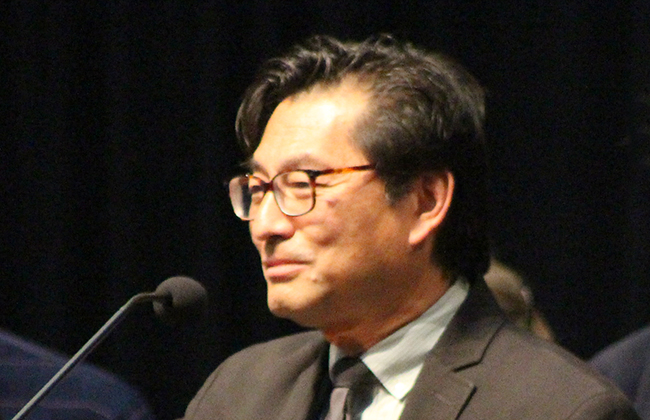 Nakakihara is an elder at Rancho Community Reformed Church

Synod delegates have elected James Nakakihara as the next president of General Synod.

In a short acceptance speech on Monday, June 11, Nakakihara shared how he has always looked up to his great uncle, who after his release from an internment camp in California volunteered for service in the U.S. military. While leading a group of soldiers in Italy during World War II, he jumped on a grenade and was posthumously awarded the Congressional Medal of Honor for his heroism—becoming the first Japanese American to receive the award.

“I always thought, I’d sure like to do something special [like that],” said Nakakihara. “I just want you to know, you’ve helped me to fulfill that.

“My wish and prayer for the coming year is this,” Nakakihara continued. “Wouldn’t it be great to set aside our differences and, instead of focusing our energies on the things we normally do, focus on the Great Commission? Wouldn’t it be nice if next year, in our overtures, we were trying to outdo each other in how well the overtures move the kingdom forward?”

Nakakihara is an elder at Rancho Community Reformed Church in Temecula, California. In the past, he has also been a small group leader and webmaster in the church. He has served the denomination as a member of the General Synod Council. He has a B.A. in Spanish, an MBA, and a California teaching credential in special education. James and his wife, Lisa, have been married for 34 years and have one son, Kevin.