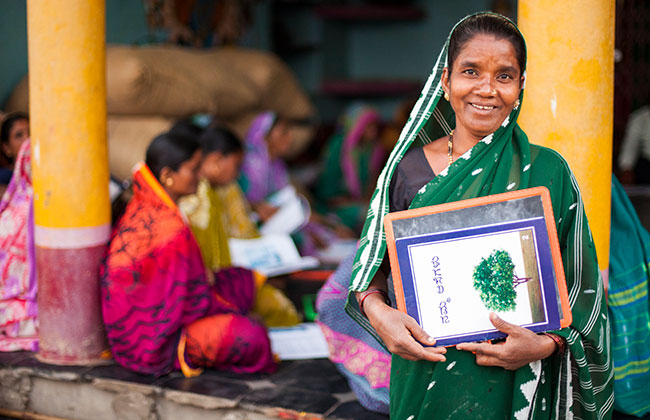 How literacy is bringing people in India out of poverty and into church.

Sarita’s family decided it the day she was born: she would become a devadasi, a bride of the Hindu goddess Yellamma. She was told that serving Yellamma was the best way for her to honor and bless her family. And she believed it.

So when she was just 14 years old, Sarita dressed in a new sari and traveled to a temple for Yellamma 50 miles from her village in southern India for a dedication ceremony. It was the furthest she has ever been from home, before or since.

“On the day of my dedication, my mind was spinning and my heart was light,” Sarita says.

A priest marked Sarita’s forehead with a swipe of turmeric powder and tied a necklace of red and white beads around her neck, symbolizing her marriage to Yellamma.

But the beads carried a different meaning than she initially understood.

“I was expected to offer my own body for prostitution. On Tuesdays and Fridays, I carried a basket in my hand and went from house to house begging, and people called me in to have sex,” Sarita says. “I soon learned that [the beads] were less a symbol of honor, and more a symbol of my own enslavement.”

As a devadasi, Sarita had to beg for food and money, earning income through sexual favors. People looked down on her and disrespected her.

“Their disrespect brought immense pain to me,” Sarita says. “I could not hide my beaded necklace; it was tied to my livelihood and also tied to my shame.”

Over the years, Sarita gave birth to two daughters, whom she sent away to the city so that they could escape her fate.

“I didn’t want people to speak about my children as they spoke of me,” she says. “I didn’t want the shadow of my life to fall on my daughters.”

Sarita saw little hope of escaping. She hated begging, but was even more afraid of what Yellamma would do to her and her family if she stopped.

“Then a miracle happened,” Sarita says. A pastor in her village invited her to an adult literacy class. There, she learned to read and write and to add and subtract. She even learned about saving money.

“But most importantly, I discovered my life had great worth in the eyes of God,” Sarita says.

As Sarita learned to read Bible stories in the class, she saw that the God in these stories was different. This God said even she, a devadasi, was worthy. Sarita had never been called worthy before, and she wanted to know more. So she started going to church.

One Sunday, the pastor preached about Rahab. Like Sarita, Rahab was a prostitute and was looked down upon. But in serving God, Rahab gained respect and dignity.

“The story of Rahab changed my life,” Sarita says.

Sarita decided to throw her red and white beaded necklace in the water. In the love of Christ, she had found her freedom. She now works as an agricultural laborer, and makes some small household products on the side to generate extra income.

“I have learned to see myself through the eyes of Christ, whose mercy touches the souls of the lost, and whose goodness restores the value of the outcast,” Sarita says. “His love welcomes every soul to life everlasting.”

Six hundred miles south of Sarita lives Kajani, who is no less a stranger to shame.

Her small, thatched home, with its sand floor, was a constant reminder of her poverty. Since she didn’t have an education, people didn’t respect her; some even refused to speak with her. Both of her children died young of preventable diseases. She wonders if they would have survived if she hadn’t been so superstitious of medical treatment.

There came a day when the pain was too much for Kajani. She doused herself in kerosene and prepared to die. Her husband stopped her, but it wasn’t until Kajani learned that an adult literacy class would be offered in her town that she dared to hope her life could be different.

Kajani not only signed up for the class but dove into the lessons. She came early, stayed late, and sat in the front row. Soon Kajani was reading and writing and doing basic math. And for the first time in her life, Kajani was shown how to save money.

Each week, Kajani faithfully handed over a few coins to her teacher. When her teacher returned the money at the end of the 12 months, Kajani had about 2,000 rupees (more than 30 U.S. dollars). It was the first time she ever held that much money in her hand.

Kajani used the money she saved to buy a goat. Within two years, one goat multiplied into a herd of 17 goats.

“I used to earn 50 rupees in a day [less than one U.S. dollar]. Now I earn that in one hour,” Kajani says. “The literacy class showed me that I could raise goats.”

Now Kajani mentors young girls and women in her village, even offering them small, interest-free loans. She has been able to add electricity and a concrete floor to her home, and she bought a mobile phone.

But the greatest gift she got from the literacy class, the source of her newfound boldness and confidence, wasn’t financial. It was faith in Jesus Christ.

“Now I want to live only for Christ and that reason alone,” Kajani says.

And she’s sharing her love for Christ with others. In fact, Kajani has brought 20 people to Christ so far, including her husband. She even hosts church in her home each Sunday.

“Jesus is the reason our life began to bloom,” Kajani says. “The literacy class is a light that has lit up my entire life.”

“We always try to work with local partners in Global Mission, and Mission India is a trusted partner who is on the ground and has been well vetted,” says Scott Engelsman, the RCA’s coordinator and facilitator for Global Mission development and engagement.

India is one of the RCA’s strategic impact areas, places where Global Mission is concentrating resources to have a greater impact in a short amount of time. Over the next three years, the RCA and Mission India will be providing literacy classes, children’s Bible clubs, and church planter training in the Amritsar District in northern India. The goal is to establish a church or worshiping group in every village, urban neighborhood, and ethnic community in the district. (Several other RCA missionaries also serve in India, working in medicine, women’s entrepreneurship, education, community development, and audio Bible distribution.)

Located in the Indian State of Punjab, the Amritsar District is home to 2.5 million people, of whom only 2 percent are Christians. And the literacy rate in the district is just 76 percent; only 72 percent of women can read and write.

These are significant needs, but Ken Neevel believes RCA churches and organizations like Mission India can accomplish a lot by working together. Neevel is director of development and facilitation for the RCA and has traveled to the Amritsar District to see the work of Mission India firsthand.

“We can have so much more impact as 1,000 churches who are coordinating with each other to serve God’s kingdom globally than as individual churches trying to do mission on our own,” says Neevel. “Maybe a single church could help a few women receive literacy education or a few children attend an afterschool Bible club. Maybe one church could support a couple of church planters. But what we are talking about is planting a church in every single village in Amritsar. That’s what God can do when we come together to do mission.”

Partnering with local groups and other organizations is also an important part of Mission India’s strategy. The adult literacy classes are led by local ministry partners.

“It’s different with each ministry partner,” says Josh Visser, the director of communications for Mission India. “I have visited several classes where the teacher was a teenager and his or her mom was one of the students. Our program is a bit unique in that it is designed so that it can be taught by ‘non-formal’ teachers who might have limited education themselves.”

This unique approach puts literacy within reach for between 120,000 and 130,000 people across India each year, most of them women.

Between 80 and 85 percent of those who enroll in Mission India’s adult literacy classes graduate, meaning that they are able to read at a fifth grade level by the end of the year. In the Indian education system, passing a fifth grade standard exam makes you eligible for a number of salaried positions, such as sweepers or errand-runners.

“Those kinds of jobs might not sound like much to us, but they represent a significant jump up from the daily labor work and agricultural work that most poor, illiterate Indians are forced to do,” says Visser.

Because Bible stories are woven into the reading materials for the literacy classes and the Indian instructors are all Christians, many students also come to know Christ as they learn to read. Visser estimates that around 40 percent of those who enroll in adult literacy classes become Christians.

“The gospel is presented gently, as much by the Christian teacher through his or her relationship with the learners as it is by the curriculum itself,” says Visser.

Both literacy classes and children’s Bible clubs are key parts of the strategy for sharing the gospel in the Amritsar District. The RCA will also be working with Mission India to directly train church planters.

This effort builds on a long history of mission in India for the RCA. John and Harriet Scudder, the RCA’s first missionaries in India, arrived nearly 200 years ago. And RCA missionaries started churches that eventually grew into India’s first Protestant denomination, the Church of South India (CSI).

“They say we’re the mother of Protestant Christianity in India. So we’re building on a very rich history,” says Engelsman. “We can be proud that we have served Christ well as a denomination through our work in India in the past, that we are serving Christ well now through our missionaries in India, and that we will continue to serve Christ well through the Amritsar project.”

Help Mission India make a difference in the lives of people in India. For $30, you can support one woman in a yearlong literacy class. For $900, you can cover the cost of a whole classroom of women. Give online at www.rca.org/literacyclassindia. Or send five children to Bible club for a year for $70. Give at www.rca.org/bibleclubindia.