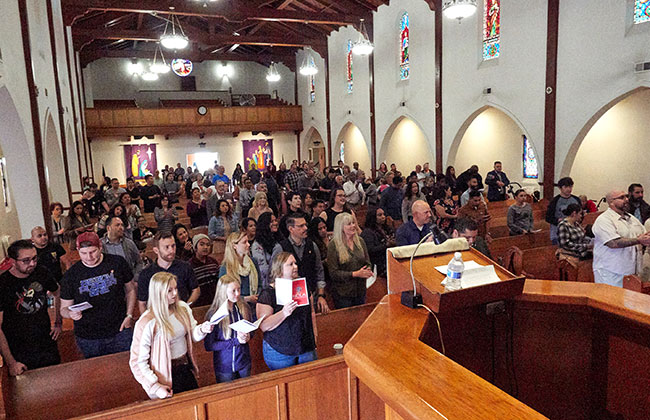 The Cycle of Discipleship

Home › The Cycle of Discipleship

How a study group meeting in a pastor’s living room transformed into a new congregation deeply rooted in Reformed theology.

Rudy Rubio says the scene could have been straight from the book of Luke: people crowded into his living room, sprawled out on the floor, draped over chairs. Sixty-five pairs of shoes in a heap by the door. If someone else had wanted to join the group, they would have had to be lowered through the ceiling.

All 65 of them—adults and children—were in Rubio’s living room for a discipleship group. At the time, Rubio was director of congregational care and outreach at Emmanuel Reformed Church in Paramount, California. He had started to notice a number of people who came to church every Sunday but weren’t connected in any other way. One person, he says, literally ran out the back door every week to avoid any pressure to get involved.

That disconnect concerned Rubio. He wanted people to be able to connect with others in a place that felt less “churchy.” So in August of 2014, he and his wife invited several families to come over after the service for a book study. Before they knew it, 65 people were filling their house every week.

Two of those people were Henry and Mayra Centeno. Henry had attended Emmanuel off and on since his late teens. When he and Mayra met, they became members. But now, in their 30s with two children, the Centenos found it difficult to get to events outside of Sunday worship. When Rubio said, “Bring your kids!” they decided to check it out.

Rubio’s goal was “to get people connected to the church,” he says, “but the vehicle was discipleship.” In this case, discipleship meant reading books—and not light reading, either. They started with Francis Chan’s Crazy Love and worked their way up to an abridged version of Wayne Grudem’s Systematic Theology.

The gatherings gave Rubio and Chris Marquez, a pastoral intern at the time, an opportunity to explain the Reformed theology inherent in Emmanuel’s worship and preaching.

“It’s a rich heritage that we’ve inherited from the Reformers,” says Marquez. “We put an emphasis on expository preaching and explaining the sacraments, confessions, and creeds.”

Was everyone actually excited about Reformed theology?

“Of course not!” Mayra says, laughing. “I thought I was already done with [school] and I didn’t have to read again.”

“Oh heck yeah!” Henry says. “I’ve been interested in [Reformed theology]. I was excited to do the book study.”

Over the course of a year, the discipleship group grew closer. What started as a one-hour book study turned into several hours of potluck, prayer time, and study at the Rubios’ house. Sometimes people would still be there after Rubio returned from preaching at the evening service.

All this time together made a difference. “Marriages were restored,” says Rubio. Other people decided to get baptized. “Three whole households were baptized—mom, dad, kids. [They went] from not even going to church to having whole families baptized!”

Despite these signs of personal growth, Rubio and Marquez believed that being a part of the group wasn’t enough. The group needed to multiply.

“Discipleship is helping people follow Jesus so they can in turn help others follow Jesus,” says Marquez.

The moment the leaders broke this news, “There was very little excitement and a lot of fear,” says Rubio. “Some people got upset at me. They thought I didn’t want them in my home any longer. So I had to go back and explain: ‘This is what we talked about from the beginning. Jesus didn’t call us to be comfortable in my living room.’”

Rubio and Marquez encouraged people in the group to consider opening their own homes for new discipleship groups. The Centenos were nervous, but they agreed to host if Marquez would lead the discussion.

In doing so, “they went from being receivers to opening up their home and helping other people receive,” says Rubio.

“Our greatest commission is not to stay comfortable in our bubble; it’s to go out and make disciples,” says Henry. Still, when he was nominated to become a deacon, he was surprised—he didn’t feel qualified but took on the role with Rubio’s encouragement.

As these new discipleship groups were forming, Rubio and Marquez were feeling convicted to plant a church. Both men were enrolled at Western Theological Seminary in a distance-learning program focused on a missional model of church in urban centers. And Emmanuel Reformed has long been committed to planting churches west of Paramount. (That commitment, along with developing new leaders, was clarified and strengthened as a result of participating in a leadership community through Transformed & Transforming, the RCA’s vision for ministry.)

So Rubio and Marquez started exploring neighborhoods between Paramount and Los Angeles—Compton, Lynwood, Watts. When they toured a building in Lynwood and the owner immediately offered it to them, they decided Lynwood was it.

“Lynwood provides a good area for us to go and be missional,” says Marquez. Its lively downtown, Plaza México, is a shopping, dining, and cultural center for Lynwood residents, more than 85 percent of whom are Hispanic.

As Rubio and Marquez started to make plans for the Lynwood plant, “the most natural thing would be to invite the people … that we were investing in,” says Rubio. So they invited members of each of the three new discipleship groups, including the Centenos, to join them in church planting.

Mayra admits she was “a little scared” by the idea. But she had gone to high school in Lynwood. When she and Henry met, she moved away. “When I got my master’s [degree] for therapy, my desire was to go back to this area. … It was because God needed me there.”

So the Centenos agreed to be part of the church plant’s core team, along with two dozen others from among the discipleship groups.

The team settled on a name that reflects their theological commitments: Reformed Church of Los Angeles (RCLA). RCLA’s first official service was last September in a public park. In October they worshiped for the first time in their building, and the grand opening was on Palm Sunday of this year.

Despite having a physical church building, RCLA is deeply committed to building relationships in the community. The church has taken advantage of Lynwood’s Plaza México as a place to host a men’s group, studying a classic piece of Reformed theology: John Calvin’s Institutes of the Christian Religion. Rubio and his family have even moved into Lynwood.

Marquez says the point is not to attract people to the church. “We really want to instill in our core team that Christianity is not an institution. … Most of our work is going to be done outside the four walls of our building.”

Many RCLA visitors come from Roman Catholic backgrounds. To them, the Reformed liturgy is both familiar and unusual. Each week, the congregation speaks the words of the Apostles’ Creed, including the line “the holy catholic church.” While the lowercase-c “catholic” refers to the universal Christian church, that’s not immediately apparent to visitors. “One person always comes up afterward [to ask about it],” says Rubio, which gives him an opportunity to explain the significance of the phrase in a Reformed context.

What’s next for Reformed Church of Los Angeles?

“We want to build a community of believers, passionate about knowing God and walking in obedience to him,” says Marquez. This means that he and Rubio already have their sights set on more church plants. From the beginning, their budget has included a line item for church planting. They hope to plant another church out of RCLA in the next three years.

Henry was elected to be a deacon again, something he told Rubio and Marquez he had no intention of doing. And he’s on deck to lead a book study from July through the end of the year, something else he never imagined. “Chris always makes a joke [that] God will surprise us a year from now,” says Henry.

There may be more surprises yet in store. People close to Henry have asked him, “Have you ever thought about being a pastor?”

“I’m not,” he says. “I’m just trying to live a more righteous life. But as much as they joke, I know that God is putting that seed in my head.”

If the idea of planting a church resonates with you, get in touch with the Church Multiplication team. Email multiply@rca.org to learn more about how starting a church is a great way to introduce people to Jesus for the first time.